These are some interesting darts.  They definitely have some con points and some pro points (haha, see what I did there?).  On the pro side of the equation I'd say that they are very grippy for lightly knurled darts, if you're into that sort of thing, and the esthetic is there too.  These are unquestionably nice looking darts. 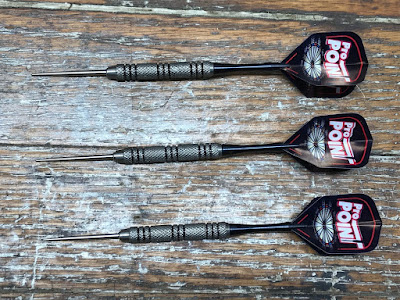 As you can see in the second picture, the collars for the moving points are extraordinarily low profile, almost indistinguishable from the barrel of the dart.  The action is sluggish, however.  In fact, I very strongly suspect that the collars incorporate an embedded o-ring inside that the point itself slides across.  If I am not mistaken this is the exact same mechanism that was invented by Jeff Pickup and eventually sold to Harrows for their Power Point line.  I am tempted to get some needle nose pliers and try to unscrew one of the collars but I do not want to mar the darts. 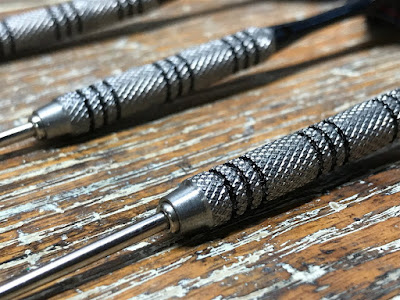 The grip is great.  The knurling is fine but the grip that comes with them is very grippy.  I have been using smooth darts lately like old copper tungstens, but back in the day I was very interested in finding darts with knurling exactly like this one. 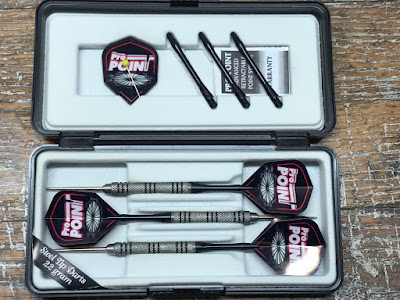 The case is a pretty typical darts case for the era that these were produced, but I am glad I have the case for them.  I don't know what they were trying to do with that 'T' in the logo for the line but it looks like a half effort.  Still, the darts themselves are quite nice, even if the action in the points is too sluggish.  When you pull moving point darts from a dartboard the typical behavior is that the points will automatically pull out to set position at the same time.  Not these.  You have to manually pull the points on each dart once you have them in hand again. 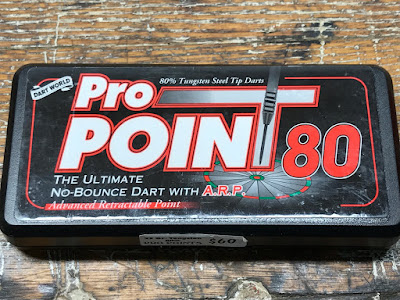