So here is my 36th maximum: 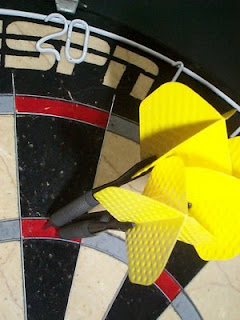 It isn't really special but it is one of those that come off rarely thrown darts. These are my mystery Bottelsen's which I am sure are relatively vintage since you never see them on ebay and no one ever seems to know what they are. I have sent emails to that company before but they do not respond very often to emails and certainly not to this one.

Lately I have been "playing" with my dart collection. not playing in the sense of throwing games but rather in just messing around with the darts. I have been re-organizing them in order of weight starting from 40 grams on down, and obviously these cam up quickly in that process since they are 26's. This was probably my first or second toss with them in months. Now they are back in the cabinet displayed with the rest of the 26's and I'll likely not throw them again for months.
Posted by Zeeple at 7:28 PM