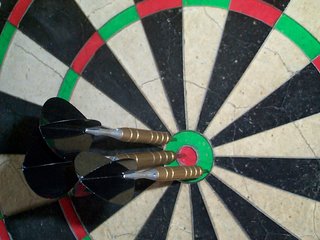 FAST FORWARD:: Well, last night's team practice came and went and I really enjoyed getting out and tossing again. I took the brass darts like I said I would and as I expected I only dropped two legs out of the entire three hours I was playing. Once cause I couldn't hit the double four to save my life (although when I started at it I had a 150+ point lead) and once against some guy that was in there shooting with his wife. I played him a best of three and did well. I lost the first cricket game to him, but then cam back in a 501 game and hit several tons, and won by a landslide. Infact, not only did he have about 250 points remaining, but I hit my out quickly. I took out a 39 s19, s10, d5. Then we decided to tie break with another game of cricket and I won with lots of good darts. The best highlight of the night though, was hitting a hat trick to win a cricket game against one of my teammates. That always feels good.
Posted by Zeeple at 2:32 AM

Hi Andy, I am glad I was able to help somewhat with my blog. If you look through the archives you will see many many pictures of different kinds of darts and there is a lot of information on a wide variety of topics. So please, dig in. And if you have any questions, please just leave a comment anywhere at all in the blog and I will be notified of the comment. Thanks!

Stick with the brass if you're scoring as well as that!

Right-o Tomm-o! I have been sticking with them. I am liking how they throw more and more. Now that the 'novelty' of tungsten has worn off I do not feel like I am throwing old technology. hahaha