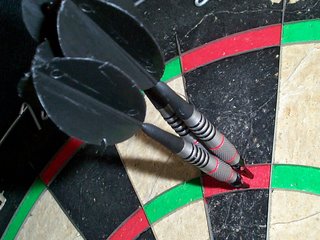 By the way are you rotating you board often, your trible 20 look beat up compare to your triple 12.

Thanks Dax, I appreciate your comment and your observation!! It is funny how a camera will highlight the wear in a board. Under normal light and looking straight at the board it is hard to tell any difference between the 20 wedge and the 12. I guess it is the combination of the flash glaring off the ends of the fibers sticking out as the angle of the shot that allows the wear to be seen so obviously in photos. Of course, if I go up and stare at the board I can see the difference. I will rotate it now!

hi jsobo, i been watching your blog for updates. I hope your elbow is fully recovered soon!!

Tried looking at the Ezchalk site last night. Loged in. No players!

What is the story with the online league? I am sure I would be able to take your last place spot and help bump you up one spot.

Hi there ny81him. Thanks for the comment. First I wanna say right off the bat that ezchalk is the most terrific free online dart service there is. You can go there and use it to play games against youyr friends anytime you want. The catch is, of course, that it is one of those deals where you have to arrange to meet your online dart buddy there. Perhaps some day, when ezchalk is more well know and when online dart play is more common there will be people waiting for an opponent at ezchalk. But in the meantime it is the kind of service where you make plans to meet there in advance. Right now you can only play the 01 games but I have contributed some perl code to the site for keeping track of a cricket game. Hopefully the guy who runs the site will get that portion done soon. I will post a separate blog about the online leagues but for now they are not running at the paul williams site.

Thanks for the info on the site.

I will try and set some stuff up with some buddies. Sometimes its easier to get people to play a real game though.

What is the Paul Williams site?

What league do you play in?

Hope all is well.

You should take advantage of the ezchalk site as best you can while it is available. It is not often that you have a free service thaat awesome.

The paul williams site is one of the two darts forums that I hang out in the most. Mostly brits there and you really get the brit perspective sometimes there. Great people. Easily my fav forum. Here it is:

I was checking out the pghdarts website... What is Single Chicago/Double Chicago? How is it played?

Ah... The question of the century: what is Chicago in the world of darts? Well, I don't know if people from Chicago will second this or not. I have only ever heard of this style of match in Pittsburgh and I am not sure if it exists anywhere else, even in Chicago!

'Chicago' is a Best-of-Three match in which the following games are played: Standard Cricket, SIDO 501, and DIDO 301. In no particular order.

There is a tremendous amount of misunderstanding as to the rules that govern a Chicago match within the Pittsburgh Steel league itself, but suffice it to say that the winner of the first diddle gets to choose which game is played first, and then the loser of the first game gets to choose which of the remaining two games is played next. And then, if a third game is required, the remaining game is played. The key is that if 501 is chosen as the first game, the second game has to either be 301 or Cricket. You cannot play the same game twice in a Chicago match.

Here is the funny thing: Everyone in the Pittsburgh Steel Tip league thinks they know the diddle rules but everyone has a completely different understanding of them. It's amazing the disconnect that exists over it. I am going to document it this year.

Thanks for the explanation...

So gathering from what you are saying. If a person or team take the first two games, what ever they may be, then the third game is not played???

Does the choice add that much to the league play?? Why not just make all three mandatory and reward points for each instead of just 2 points even if three games are played??

I like knowing the different formats different cities and leagues play. Being a NYDO player I have only learned that way of thinking. But now I have been at a few tournaments. Including one run by the ADA my eyes are open to the fact that there might be better options for formats.

With all that said, I think the NYDO does a great job in many respects, but as with everything there is room for improvement/advancement.

That is correct, if the first two games in a chicago match are won by the same team/person then the last is not played. I think the choice being awarded by the diddle is really interesting. If you are a crcket person playing against an 01 person then it is a huge advantage to get that diddle. And visa versa. At first I though the whole Chicago Match thing kida sucked but I am starting to see the value in it. It makes for an interesting match at any rate. The overall format of the league I think is not that great, but the format they use in Seattle is pretty awesome. I think it is best format I have ever played.

As for the Seattle format. How does that work, if you do not mind? I could not find it on the web.

You can read all about it there. The guy that does that site is a friend of mine and he is a professional Flash developer so the site is completely nice.

I have never really played 301. And 1001 is only played in the playoffs as a tie breaker.

Do they report well your individual stats?

Do you also collect boards that have sponsors on them like budwiser and such? Just wondering.

Living in NYC does not allow me to collect boards and such, not enough room.