Last night's match was a nother defeat for my team but good times were had by all. At least this week my team didn't have to completely carry me like they did last week! In fact I did almost okay last night.

My first match was a doubles cricket which we won. My partner was hitting her trips and I hit three bulls in the last two rounds for the win. In fact that was a close one! In our opponents last round they hit a solid hat trick to bring themselves within 10 points of us, but I hit that last needed bull with my last dart. The next match was a doubles DIDO 401. I had the same partner and we won again. I doubled in on the 8 in the first round and took an 8 out for the win.

My singles match was very well played by both me and my opponent but he got the best of me. He was far and away their best darter so I am happy I gave him a run for his money. He won the first game, cricket, because I couldn't hit my bulls at all. Otherwise that game would have been mine. Next game was DIDO 301 which went well for me. I hit a 92 in on my first round and finished the game in 19 darts, 4 of which were misses at the double out, and one of which was wasted in the single bull for the very first dart of the game. The tie breaker was a SIDO 501. It was tight, but he hit his double before I hit mine, although I had at least ten darts at the out before I lost. All I could do that game was whittle it down to bones. 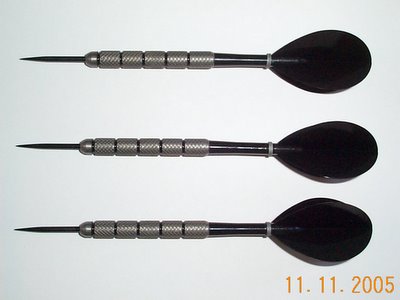 These are the darts I used last night. They are 24 gram Piranhas by Harrows. FP with in-between leangth nylon shafts and black poly pear flights. They are a good dart. I have been leaning lighter lately though.
Posted by Zeeple at 7:35 PM

You should not use different darts every week . . .

Glad you're enjoying it again. Sometimes I forget that is what it really is all about.

Thanks for the tip Juergen. I agree and during league I (these days) rarely switch between darts and the only reason I didn't take the radarts this week was because the Piranhas were already in a case and I was in a HUGE hurry. I did better with them than I did with my regular darts last week though...