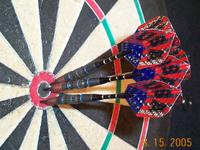 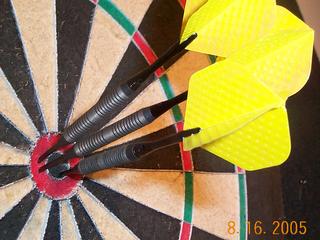 One thing I have noticed so far about the perl script I am using is that, even though it is technically random, it seems to favor a handful of dart sets. I am thinking about re-writing it so that it will use a set and then remove it from the array until the array is empty and then start over. That way it will cycle through all of the darts randomly. However, within a few weeks I hope to actually have my new darts from Canada, as well as be on a league team, so I will likely just use the f switch all the time for practice. That way I am sure to always be using the new darts.
Posted by Zeeple at 7:22 AM

It might be interesting to somehow put those darts into a league table so you could see which ones you are throwing the best scores with.

Yes. I throw them all equally well ;)

Equally something anyway. Over the course of several years I have been able to determine that I do better toward 24 gram as well as toward front loaded darts.

You are right though, it would be neat to see a spreadsheet.