I've hit enough robin hoods now that they have lost their novelty, and I almost didn't bother taking a picture of this one. But then I noticed that this particular robin hood appears to be perfectly straight and the point split the flight of the blocking dart so perfectly that you can actually see the point of the dart from both sides. The only improvement I could imagine for this robin hood would be if the wings of the flights lined up as well, so that they were on the same plane.

The number ring is up in this pic which is a departure from normalcy. When I do put it up though I usually hold it with three spare darts. In case you are wondering, I missed the double with the third dart too. 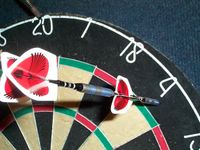 As always, click the image for a larger picture.
Posted by Zeeple at 1:18 PM

I haven't had one of these for a very long time. I had a dart stick into the side of a flight a few weeks ago though. I saw a player get one of these in consecutive throws in the pub. There was swearing :o)