A Mouse for My Skill

This is the fruit of my darting toils.

My girlfriend and I attended a Fourth of July celebration at the Point, which is a very nice State Park just off downtown Pittsburgh. The crowds were insane but it was a good day all around and we even were able to catch a Pirates game. In addition to the numerous vendor booths, military recruiting stations and munchies, there were a few carnival style games. One of which, was a darts game!

Now, I have a pretty cynical opinion of carnival games. I figure the ones that are not rigged are money sinks and only those suffering from high jubilation play them. Take the dart game for instance. For the price of $2 you get a single dart. For $5 you get three. This seems like a high price to me to play a game that doesn't give out very big prizes. You have to accumulate many wins (12 or so) to upgrade to a medium sized stuffed animal. On top of this, the darts themselves are tiny, light, and dull, and the balloons are underinflated so that the darts are as likely to bounce off them as they are to pop them.

This was certainly the case at the point. After the ball game I wandered over to take a toss or two at the dart booth. Afterall, I just got out of a ball game, it was a beautiful evening and I was suffering from all sorts of high jubilation. Conditions were ripe for losing money at a carnival game. There was a line which I didn't expect, and the guy at the front of the line was apparently doing pretty well. I watched him for a while. This guy slapped down money fistfulls at a time. His throw was less than studied, and it appeared that his philosophy was that this was more or less a numbers game. Throw enough darts and eventually he'd end up with the prize he wanted, regardless of cost. So I watched as he chucked dart after dart at the under inflated balloons. About a third of his darts popped a ballon, another third bounced off the balloons and a full third missed altogether. The crowd behind him was growing restless and it appeared the attendant was perfectlt happy to keep trading darts for dollars unitl he had no choice but to move on. I headed back to our blanket since the fireworks were about to start. 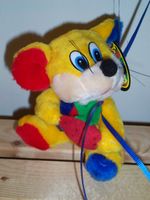 As always, click the image for a larger picture.

But fate was not done with me yet. Just today my girlfriend and I went into Squirrel Hill to run an errand and found all the streeets blocked off for the street fair. Lo and behold, the booth blocking Murry was none other than the very same dart game I saw a couple of weeks ago at the point. I walked right up to the booth, slapped down a fiver and said, "I would like three darts, please." The darts were smaller than I remembered and lighter than they looked. The points were dull too, as I suspected, but nonetheless I squared up and went set. I examined the balloons. They were not inflated evenly, and not all the same size. I could tell which were better for the popping because they were shinier and more transparent, wheras most were duller and more opaque. I found two that looked pretty full, right next to each other and half way up the wall, right where the double three would be if it were a board. The first dart found it's mark. Pop! The second dart did as well. Pop! But what to do with the third dart? There was one more well inflated balloon on the bottom row and way off to my right. I decide to go for three in a row so the third dart went to a balloon that was right next to the first two.

Bad decision. Sure enough, the dart hit the balloon, more or less dead on, but bounced off anyway. The balloon won that battle and survived to see another darter. So for two out of three balloons popped, I earned a small stuffed animal or an inflatable baseball bat. You can see my choice above. I turned to my girlfriend and offered her the mouse and she was genuinely happy. I immediately understood why the guy at the Point was so willing to part with his hard earned money.
Posted by Zeeple at 4:17 PM