Here is their story. I played on a B League team in Seattle a few years ago. And at that time there was a good team who had never been beaten. Well we beat them that night, by a slim margin, and we were the first team to ever do so, in any season. We later met them in the final Play-off match and beat them again for first place.

The first night we beat that team, one of their guys broke a point, and abandoned his darts. I kept them as a keepsake to remember our fine victory, but alas, I did not know then that points can be replaced, and so I didn't keep the broken one!

But they are fine darts. Slim yet heavy (25 grams), with a good feel when you throw them. Thus, I am trying to complete the set, yet, I do not know what company made them. Anyone who recognizes the pattern, please let me know!

UPDATE: I have two solid leads on these darts. One source says they may be Freeflight Mavericks, and a poster over at www.dartplayer.net has the exact set and says they are made by a now defunct (or at least very hard to find) company called Wise, out of GB.

UPDATE: I am reposting this blog entry for the benefit of the Cleveland Darter Club, who has graciously agreed to post a link on their site at: http://www.darter.org (Thanks guys!) 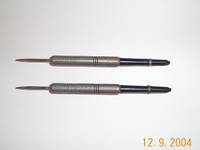 As always, click the image for a larger picture.
Posted by Zeeple at 1:22 PM

You may want to try contacting Jim at atlanta darts (www.atlantadarts.com). To me, those particular darts look custom...specifically because of the pattern along the barrel (it wouldn't be possible to make those marks while a lathe was spinning).

I'd be willing to bet if you send them one of the 'originals', they'd be able to come up with something almost identical to what you have there.

I sent a note to Atlanta Darts. I'll post what I hear back from them.