Last night's Metro Darts Club Qualifier match was one terrific evening out for me in terms of darts.  I won the match 5-0, taking all five sets and only dropping four legs out of the 19 total that we played.  But the goodness started early on.

I got there early.  I played a full round of doubles, and resisted very strongly throwing any warm up darts at the Triple 20.  I did the doubles in numerical order, ascending, and allowed only one dart at each double per round.  Moving on whether I hit it or not, and coming back to the misses in subsequent rounds.  I went from D1 to D20 in the space of about 20 minutes this way and ended the warm up session with a hat trick.  I was happy and I felt prepared, despite the slight butterflies I was feeling before the match (which I seem to always feel).

As I was sitting waiting for my opponent to show I was approached by the president of the other league I participate in who wanted to give me a prize I was owed for hitting a Ton-80 in B League last year.  He offered me the choice of pin or patch, and of course, being the Eagle Scout that I am, I chose the patch without hesitation.

I knew my opponent that night would be a challenge as he won his last match in straight sets, 5-0, and has been playing for quite a long time.  A good 11 years longer than I, as it turns out. He is a good person, an experienced player, and he loves darts just as I do.  I expected it to be a good match.  As it turns out I was throwing quite well, much better than I normally throw, I think, and won handily.

As for my four losses last night, they were all pretty similar.  In each I had a low number remaining when my opponent took out his double (2, 4, 5, 4) and so it is safe to say that my losses were all due to an inability to finish.  On the whole, though, my finishing last night was quality.

I am very happy with last night's match.

I only brought a single set of darts with me on the theory that having another set of darts to fall back on allows me to ignore bad form.  If I think: "that was a bad visit, I'll switch to my other darts next turn" then I am not addressing a failure in mechanics that is what is almost certainly what caused the bad visit in the first place.  I think I am going to keep this practice up.  The darts I chose for last night's match were the 22 gram One80 Revenges, dressed in #4 carbon Fit Flight stems and standard Fit Flights. 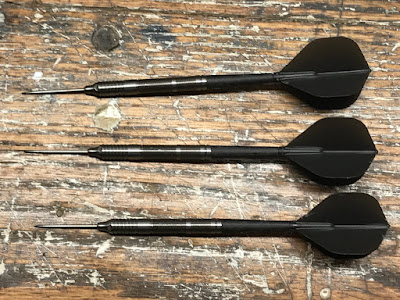