On Wednesday night I participated in my first ever post-season singles tournament.  This is something new that my league has started since I went on hiatus five years ago.  Essentially, the top 8 available players are entitled to participate in a singles tournament to garner the bragging rights of "best in league".

In the winners bracket the players must win a best 2 of 3 match that goes like this:  the highest seeded player always (all night long regardless of circumstances) chooses who corks first. The winner of the first cork chooses the first game between American Cricket and SIDO 401.  The second game is recorked, again with the highest seeded player choosing who diddles first, but the second game is whichever game was not played first.  So if the first game was Cricket, then the second game is 401, etc.  If a third game is required then the winner of the third cork may choose either Cricket or 401.

In the losers bracket only one game is played.  The higher seeded player chooses to see or show and the winner of that cork may select either American Cricket or SIDO 401. 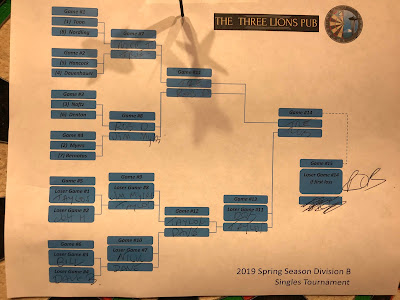 My first round in the winners bracket was again a swell guy named Bill who, to my utter delight, said that he has a plaque with my name on it from a previous season in his closet, and that he would give it to me once he saw me again.  This was a two leg match and I won them both, but I would not say that I won them handily.  After all, Bill is a quality darter and these was the first legs of the night for both of us.  I won the first cork and chose 401, which is unusual for me.  Normally if I get to choose the game I will choose Cricket if I know I am going first because I think it is more critical to go first in Cricket than in an 01 game.  Regardless, I chose 401.  After 18 darts I was down to 90, and I always go 60, 30 when in that spot, knowing that if I hit the 20 (instead of the 60) I still have a great leave.  However, in this case I did hit the 60, and missed outside the 30 with my next two darts.  Next round I hit the 30 with my second dart for the win.  Bill had 151 left at that point.  Neither one of us put up any big numbers, so I think it is safe to say I won simply because I was slightly less "not on" than he was.  The next game was Cricket and I also won the cork.  Again, no big rounds for either of us, but I managed to squeak out the win anyway.  So that was my first round of the night. Not a bad way to start!

My second round was against another great guy that I have known for a long time named Jim.  Again this was a two leg match and I won them both.  I won the first cork and chose Cricket.  We both played very B-Leagueingly, not putting up any significant rounds at all.  in fact Jim should have won this game but he couldn't hit his bulls, whereas I hit them no problem.  I hit four bulls in five rounds, opening them up and overcoming a small point deficit for the win.  Jim won the second cork and we played 401.  This time I played quite well.  I put up my first ton for the evening and threw a 20-dart game with an average turn of 60.2 points.  In fact my last two rounds were the first true sign my evening would be going well:  I hit a ton, leaving 70, and then next round I hit the 54, and the 16 in short order, still holding my last dart.  This concluded my second round of the evening, still having not lost a leg!  Here was the winning shot: 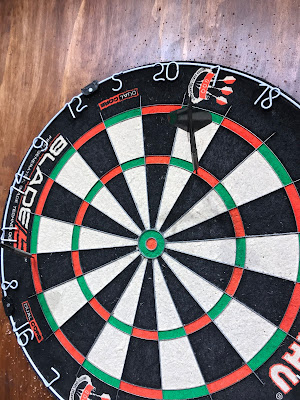 My third round in the winners bracket did not go well. In fact it was also a two round leg but I was on the losing end of both of those legs. Tre won the cork and chose 401.  Neither of us put up any numbers during this leg and it came down to who could hit their out and that was him!  I whittled my score down to 55, busted the 55 out, whittled it down more to 20 next time up but that was all she wrote for me. Tre took out a double 2 to win.  In the next leg, Cricket, Tre won the cork again and with both opened with a single 20.  But then a few rounds later I was in the hole 38 to 100 and I never caught up. In the last few rounds of the game I hit 6 bulls and almost caught up to him but it was not enough and he won, bumping me out of the winners bracket.  This was my first elimination of the  night, and as it turns out, my only elimination.  I did not know it yet, but within the next hour or so I would be handing Tre back to back eliminations in the finals!

My first round in the losers bracket was against a young man I may have played against before in league but honestly I do not remember. I met a lot of new people this year! I won the cork and chose 401.  Neither of us were on fire exactly, but I did hit my second ton of the night in this game and then took out a 53 by going 13, 40 in two darts, at my first opportunity. It is rare for me that I have a game where I hit the double for the out with the very first dart that I throw at it, but in this game that was the case.  This was the last losers bracket match before the finals and the fact that I won it meant that I had the privilege and the honor of playing against the survivor of the winners bracket in the finals match. 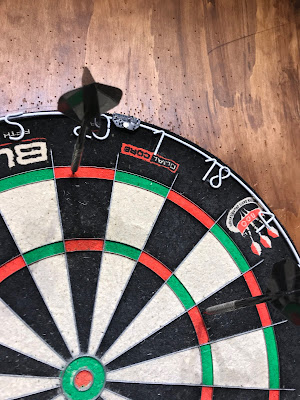 I won the first cork and chose Cricket. I opened with a triple 20 and nothing else and he answered with a four 19's. Within a couple of rounds I was in the hole and would never climb out of it.  He hit two 5 Mark rounds during the game while I hit none, and even though I almost closed the gap with 5 bulls near the end he hit his inner bull to win the game and the first leg of the finals.  The next game was 401 and I won the cork. I was throwing well.  In 15 darts I whittled my score down to 140 and in my next turn up almost took it out.  I hit 60, 60, and then my shot at the Double 10 was a wide miss inside for a score of 130, and 10 remaining.  Sadly, it took me 22 more darts to turn that into a win, including 5 rounds in a row that were either misses or busts at the Double 1.  I cannot believe I won that one but I did.  If he had been hitting his doubles that would have been my second elimination and the end of the tournament. Tre won the third cork and chose Cricket.  This was a B League effort on both our parts, neither of us putting up any good rounds, with one exception. To open the game I hit a Triple, 20, a Triple 19, and a Triple.... 4.  A few more millimeters and I would have had myself a White Horse :) Sadly, that nice opening round was not portentous, and the rest of the game was unlively.  We both had several dead rounds aiming at the bulls but I finally won, handing him his first elimination.  Now we need to face off again in another best 2 of 3 match to see who would win the tournament!

The second set went like this: I won the first cork and chose Cricket.  My only exceptional round was the 3-Bulls round I hit to win the game.  The second game was a forced 401, and I won the cork. This was the highest caliber game of the night. We both brought our A League games to the oche.  In my first four rounds I hit 85, 81, 100, and 82, leaving 53.  It took me 3 more turns to whittle that down to zero, but I eventually took out Double 12 for a 19 dart game, winning the tournament, and handing a great player back to back eliminations for an exciting come from behind victory.  He won the first 3 games we played against each other and I won the four we played after that across two matches.  I felt like the 2004 Boston Red Sox.  It was a wonderful feeling and I will remember that night for a long time (I hope).

This was the winning 24: 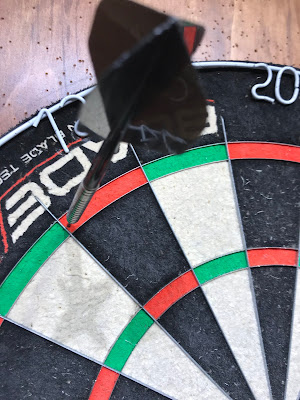 The darts I used during the tournament were two sets: 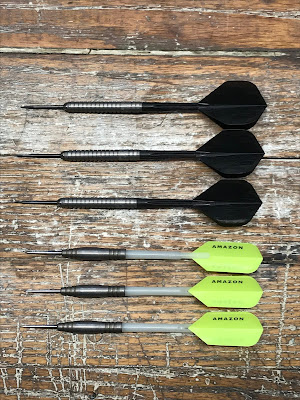 I'm very curious as to why you're still playing with movable point darts when I notice you're playing on a brand new blade wire board.

Great question! So many ways to answer that...

First, I will say that I became thoroughly unconvinced years ago that moving point darts reduce bounce outs by any non-trivial measure. On top of that, even when using fixed point darts bounce outs are so rare that even if half of them could have been prevented with a moving point dart, they would total to no more than a few per year. And on top of that even, is the fact that the spidered board is starting to become a relic of the past. most league venues and tournament venues these days sport bladed boards. Sure, you see the spidered board occasionally, but not often enough to worry about using _any_ supposed bounce out reducing technology (whether that is a moving point or something else).

Thanks for the question, tho!