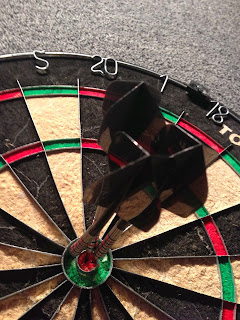 But hopefully not a jinx.

I am entering league again! Very happily I have managed to scrape together enough players for an A-League team to be played out of Ballard Station Pub this Spring. Half the guys I know and half I don't. Last night we met for a team practice, and as usual I brought two sets of darts with me. The Dennis Priestleys seen above and the old 28 gram GTs that I bought years and years ago. Some how I managed to squeak out wins in most of my games including the five count above and another four count in bulls with the GTs. I feel it will be a fine season!
Posted by Zeeple at 7:03 AM