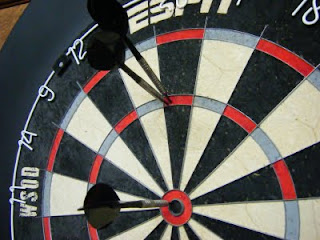 Well what do you know about that? While throwing darts in my garage the other day I had spectacular showing of good hits and low(ish) dart games and the crowning achievement was this here pictured 170-in. This is a first for me, ever, and I often fantasize about pulling one of these off in competition. The game that this throw started did not end spectacularly at all, in fact it was completely unrememberable but the start was a nice highlight of my evening.

The darts I was using are the darts I used to hit my first ever competition 180 (previous post) and they are the 21 gram Cootes.

Someday I am going to hit a 170-in in competition. I can say this with authority because I always try for it even though maybe I should not be and maybe by always doing so I am cheating my teammates a little bit. Is this possible? Let me explain what I mean. As a member of a darts team, or any team for that matter one is expected to eschew personal glory in favor of making decisions and throwing at numbers that will better increase the chances of a in. The classic example of this is: Player A is at 131 points. He hits a single 2 and then a triple 20 with his first two darts leaving 51 with one dart in his hand. What does he do? Does he go for another single 20? If he hits it he gets a ton which is added to his "all star" points (personal glory) but he leaves his partner a 31 out. Or does he go for a single 19? Hitting it would leave his partner a nice 32 out but with 99 scored in a round he would not be able to all to his all star points?

I am the guy that goes for the 19. Not the 20. I am not that big a prick, and I am a good team player (in fact I was the captain for years) and so I have always had a very strong 'advance the team' mentality. But then how do you explain that I have at least one selfish dart in every 01 game whether it is a singles match or a doubles match? When I m trying to get on in a DIDO game my first dart is always, always, at the double bull. Hit or miss I do not spend any more at all trying to get on this way. My pattern is that I throw the first dart at the double bull. If I m so lucky as to have a hit I'll go for the triple 20 on the next two darts (like in my garage the other day!!) If I miss, my second dart goes at the double 20, if I miss then the third dart also goes double top. If I do not get on in my first round, then I go double 16 next round till on, and if that doesn't work I go double 11 until I am on no matter how many rounds. So this one selfish dart is all I afford myself during any given 01 game.