My first attempt at the dynamod lasted for a couple of years or maybe more before I was forced to find a a new system. The fatal flaw with the first system was that I was using the rubber gasket from the GT push-in shaft system and the rubber dried up and got weak. And moving the dynamods from dart to dart and back again (I have several weights of GT darts) further weakened it. I guess it was inevitable that the system would eventually break down. The next generation of dynamod is much more solid and much more movable from dart to dart.

While dart surfing one day I came across the spinning flight system over at www.a-zdarts.com and noticed something I'd never seen before. The Pro-Line Dynastar stems. They are these tiny little stems with very small threading designed for the Dynastar (or Pro Line) dart line. I bought a set of them hoping it would be the same thread size as what is used for the GT stems. Alas, it was not. The pro-line stem was much smaller threaded than the GT stems and did not fit the GT at all. I shrugged it off as a failed experiment and set it down for a while. 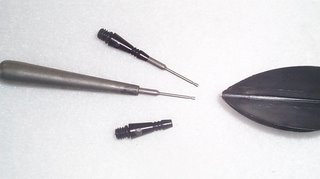 I found a way to do it. I ordered a sample of surgical micro-tubing for a different project I'd been working on and I decided to see what would happen if I used a small length of that tubing as a buffer between dart and stem. So I screwed the pro-line stem into the capilary tubing first, cut the tubing off at the end of the stem with a razor, and then screwed that into the back of the GT dart and voila! Perfect fit. It is snug too. I can try pushing the stem left and right and there is virtually no give so it is as if the threading were in the perfectly. In fact it is so snug that I needed to use some plyers to finish screwing the stem in the rest of the way. In the picture you can see the stem, the 2ba adaptor for the stem, as well as the stem in the dart itself. I am very happy with this arrangement, and I have been throwing the Gen-2 Dynamod on my 20 gram GT2's for a couple of weeks now very happily and I have seen no signs of weakness in the new system. However, I have commisioned the creation of yet another generation of dynamod!! More on that later.
Posted by Zeeple at 3:55 AM